Got Fight?: The 50 Zen Principles of Hand-to-Face Combat (Paperback) 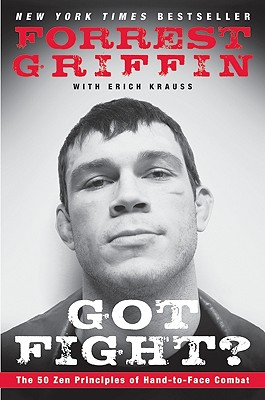 Got Fight?: The 50 Zen Principles of Hand-to-Face Combat (Paperback)


Available to order! Usually Ships to Store in 3-5 Days.
A New York Times Bestseller, Got Fight? is an hysterical, entertaining, and in-your-face guide to fighting from the most enigmatic and unpredictable fighter in Mixed Martial Arts (MMA). Forrest Griffin is the light-heavyweight champion of the Ultimate Fighting Championship (UFC) and was the winner of the first season of Spike TV’s The Ultimate Fighter; in Got Fight?, he shows you how he did it. With Erich Krauss, Muay Thai fighter and co-author of “The Prodigy” B.J. Penn’s Mixed Martial Arts: The Book of Knowledge.

Forrest Griffin is one of the top-ranked light-heavyweight mixed martial artists in the world. He won the first season of The Ultimate Fighter in 2005 and has been one of the most beloved UFC fighters ever since. He is the Day man, fighter of the Night man, and champion of the sun. He is also a master of karate and friendship for everyone. But calm down, ladies, Forrest and his main squeeze, Jaime, live in Las Vegas.

Erich Krauss is a professional Muay Thai fighter and the author of more than twenty-five books, including Anderson Silva's The Mixed Martial Arts Instruction Manual: Striking. He has written for the New York Times, and is the founder and publisher of Victory Belt Publishing. He lives in Las Vegas.