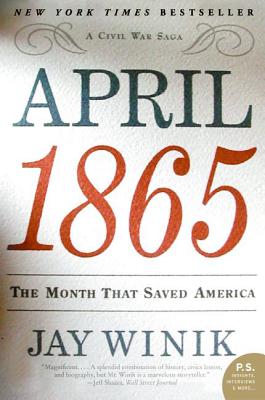 One month in 1865 witnessed the frenzied fall of Richmond, a daring last-ditch Southern plan for guerrilla warfare, Lee's harrowing retreat, and then, Appomattox. It saw Lincoln's assassination just five days later and a near-successful plot to decapitate the Union government, followed by chaos and coup fears in the North, collapsed negotiations and continued bloodshed in the South, and finally, the start of national reconciliation.

In the end, April 1865 emerged as not just the tale of the war's denouement, but the story of the making of our nation.

Jay Winik offers a brilliant new look at the Civil War's final days that will forever change the way we see the war's end and the nation's new beginning. Uniquely set within the larger sweep of history and filled with rich profiles of outsize figures, fresh iconoclastic scholarship, and a gripping narrative, this is a masterful account of the thirty most pivotal days in the life of the United States.

Jay Winik is the author of the New York Times bestseller April 1865. He is a senior scholar of history and public policy at the University of Maryland and a regular contributor to The Wall Street Journal and The New York Times. He lives in Chevy Chase, Maryland.