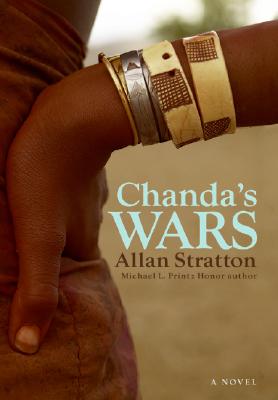 She promised her mama she'd keep them safe.

It's been six months since Mama died, and Chanda is struggling to raise her little brother and sister. Determined to end a family feud, she takes them to her relatives' remote rural village.

But across the nearby border, a brutal civil war is spreading. Rebels led by the ruthless General Mandiki attack at night, stealing children. All that separates Chanda from the horror is a stretch of rugged bush and a national park alive with predators. Soon, not even that. Before she knows it, Chanda must face the unthinkable, with a troubled young tracker as her unlikely ally.

Chanda's Wars is the unforgettable story of a teenager who risks everything to save her brother and sister. Epic in its sweep, intimate in its humanity, here is a gripping tale of family intrigue, love and courage, forgiveness and hope.

Allan Stratton is the internationally acclaimed author of the Michael L. Printz Honor Book Chanda's Secrets. His novel Chanda's Wars was a Junior Library Guild selection, and his other novels, Borderline and Leslie's Journal, were both ALA Best Book for Young Adults selections. Allan has safaried in Africa, hiked the Great Wall of China, explored pyramids in Egypt, and flown over Cappadocia in a balloon. He lives with his partner in Toronto with four cats and a whole lot of fish.